Can My Employer Force Me To Sign An Arbitration Agreement Without Reading It First? 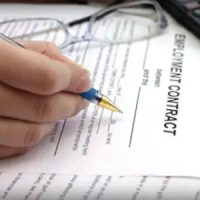 Employers will often present arbitration agreements to newly hired employees. Sometimes this comes as a separate agreement. Other times it is a page of terms included in a longer document like an employee handbook. Generally, if an employee signs an arbitration agreement of any sort, they are legally bound by its terms. This may include forfeiting the right to sue the employer in civil court over violations of wage and hour laws, such as a failure to pay minimum wage or overtime.

To illustrate an example of an arbitration agreement that was voided due to unconscionability, consider this recently published decision from the California Second District Court of Appeal, Nunez v. Cycad Management LLC (2022) 77 Cal. App.5th 276. The employer in this case hired the employee to work as a gardener.

The employee is a native Spanish speaker with only limited English-language skills. Despite this, the  employer  conditioned the job on the employee signing a “bunch of documents to sign”  written in English. These documents included a binding arbitration agreement. The employee  was never given a chance to review the documents nor informed of their contents in Spanish. Nevertheless, the employer told the employee he would be fired if he did not sign, so he did.

The employee subsequently sued the employer for civil rights and labor law violations. The employer moved to compel arbitration. A Superior Court judge denied the motion, finding the arbitration agreement was both procedurally and substantively unconscionable. On appeal, the Second District agreed.

The appellate court explained the agreement was procedurally unconscionable because the seven-page document was only furnished in English, a language the employee could not comprehend, and he was never given adequate chance to review the agreement or even have it translated into Spanish. The Second District said the employer demonstrated “oppression and surprise amounting to procedural unconscionability by failing to provide a copy of the agreement in Spanish.”

As for substantive unconscionability, the Second District identified a provision in the agreement that said if the employee pursued arbitration and lost, he could be compelled to pay the employer’s legal fees plus the costs of the arbitration itself. This was unconscionable, the Court said, because in the normal civil litigation process an employee could not be forced to pay such costs even if they lost. The agreement also improperly restricted the employee’s ability to conduct discovery in proving his case.

If an employer ever asks you to sign an agreement you do not understand or comprehend, you should seek legal advice. Certainly, if you have reason to suspect that an employer has violated your legal rights, it is imperative that you speak with a qualified California employment lawyer for employees. Contact the Law Office of Karen J. Sloat, APCtoday.

By Karen J. Sloat, APC | Posted on July 20, 2022
« If I Am Fired, Does The Employer Have To Pay My Final Wages Right Away?
Do California Employers Have To Pay Employees For Time Spent In COVID-19 Screenings? »
Skip footer and go back to main navigation