Can I Rely On A Staffing Agency’s Arbitration Agreement To Protect Me In The Event Of An Employment Lawsuit? 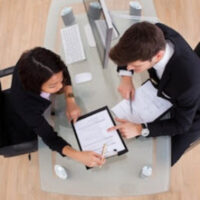 California employers often rely on outside staffing agencies to hire and assign key workers. The worker typically signs an employment contract to be an employee of the staffing agency itself, rather than an employee of the agency’s client. The agency handles the recruits, screens, hires, and pays the workers, while the client retains the ability to supervise and assign the workers provided to specific tasks.

The U.S. Ninth Circuit Court of Appeals recently addressed an interesting legal question that arose from the use of staffing agency–namely, can a client seek protection under an arbitration agreement signed by the agency and the worker?

Here is the situation. The plaintiff in this case, Franklin v. Community Regional Medical Center, worked as a nurse. She signed a contract with a staffing agency that placed nurses with healthcare employers. When hired by the agency, the plaintiff signed the agency’s arbitration agreement, which covered “all disputes that may arise out of or be related to [the plaintiff’s] employment, including but not limited to the termination of [her] employment and [her] compensation.”

The plaintiff only worked at the Fresno hospital for a few weeks. She subsequently sued the hospital, alleging it violated the Fair Labor Standards Act (FLSA) and California labor law by failing to pay her properly where she was required to work.

In California, a person who signs an arbitration agreement with one party cannot try to avoid their obligations by suing a third party based on facts that are “intimately founded in and intertwined with the underlying contract obligations.” To put it simply, the plaintiff’s lawsuit claimed she was not paid properly under federal and state law, but under the contract she signed with the staffing agency, the agency was responsible for paying her, not the client hospital. So, if she had any legal grievance with respect to pay, it fell under the terms of the arbitration agreement, notwithstanding the fact she sued the hospital and not the staffing agency.

Relying on third-party staffing agencies can make life much easier for your business in terms of dealing with legal issues related to human resources. However, there are also potential risks involved, especially if you do not fully understand the legal relationships between all of the parties. If you need advice or guidance in this area from an experienced Riverside County & Coachella Valley employment lawyer representing employers, contact the Law Office of Karen J. Sloat, APC, today to schedule a consultation.

By Karen J. Sloat, APC | Posted on July 30, 2021
« Understanding Your Religious Rights In The Workplace
Does Your Company Need To Rethink Its Data Security Policy For Remote Workers? »