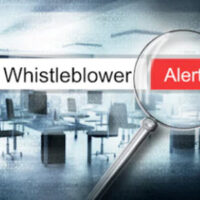 Employees should never be placed in a position where they have to break the law or engage in fraudulent or unethical behavior just to keep their jobs. For this reason, California law provides strong protections for employees who act as “whistleblowers” to expose such corporate malfeasance. Among other things, this means a worker who is fired for engaging in whistleblowing activities can sue their former employer for damages.

The California Supreme Court recently issued a decision, Lawson v. PPG Architectural Finishes, Inc., which will make it easier for whistleblowers to pursue their claims under state law. The plaintiff in this case was a regional sales manager for a paint manufacturer (the defendant). According to the plaintiff, his then-supervisor ordered him to incorrectly tint the paint he sold to a Lowe’s key customer. This would force Lowe’s to sell the paint at a discount and prevent the defendant from having to buy back the product.

The plaintiff sued the defendant in federal court, citing violations of California’s whistleblower laws. A federal judge dismissed the lawsuit, however, after applying what is known as the McDonnell Douglas test. This is a three-prong test created by the United States Supreme Court for assessing cases involving allegations of employment discrimination. One of part of the McDonnell Douglas test requires the plaintiff to produce evidence that the defendant’s stated reason for firing the employee was “pretextual,” i.e., a sham to cover up illegal discriminatory motives. Here, the judge found the plaintiff could not provide similar evidence to show the stated reason for his firing was a pretext.

The plaintiff appealed the judge’s decision to the U.S. Ninth Circuit Court of Appeals. There, he argued that the McDonnell Douglas test was inapplicable to a California Labor Code violation. The Ninth Circuit decided to refer the matter to the California Supreme Court, as this involved an interpretation of state law.

The California Supreme Court agreed with the plaintiff that McDonnell Douglas was inapplicable to state whistleblower lawsuits. The Court explained that under state law, including Labor Code Section 1102.5, the whistleblower plaintiff did have an initial burden to establish that “retaliation” for whistleblowing was a “contributing factor” in their firing, which the plaintiff here did. Also, the burden does shift to the defendant to show that it had legitimate reasons for the termination. However, unlike a discrimination plaintiff, there was no need for the plaintiff to satisfy the additional requirement of McDonnell Douglas to prove the defendant’s stated motive was a pretext. Instead, the burden remains on the defendant to show that “it would have taken the action in question for legitimate, independent reasons even had the plaintiff not engaged in protected activity.” If the defendant fails, no additional proof is needed by the whistleblower to prove their case.

Many workers are unsure of what to do when they suspect, or have concrete evidence of, corporate wrongdoing. An experienced Riverside County and Coachella Valley employment lawyer for employees can provide you with legal guidance and assistance. Contact the Law Office of Karen J. Sloat, APC, today if you need to speak with an attorney right away.

By Karen J. Sloat, APC | Posted on May 24, 2022
« Congress Passes Legislation To Restrict Use Of Employer Arbitration Agreements In Sexual Harassment And Sexual Assault Cases
Are Employers Liable For A Customer’s Sexual Harassment Of An Employee? »
Contact Us Today